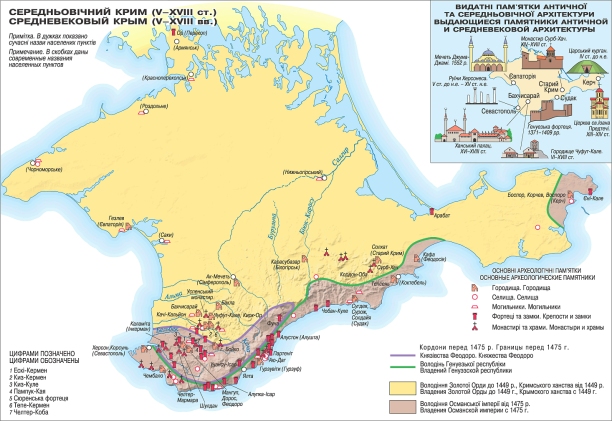 It may be the focus of geopolitical contestation today, but the Crimean peninsula is also surprisingly replete with legends and unusual sites that seem simply to be crying out for the Mythic Russia treatment. The mountain of Ayu-Dag, Bear Mountain in Tatar, was actually, so the story goes, a giant bear. Sent by some forgotten god to destroy the settlements of the humans living there, who refused to pay the sanguinary deity homage, it instead was entranced by the beauty of the Crimea. Its master angrily turned it to stone when it came to drink of the Black Sea. But what if it still dreams? Or maybe even might be hibernating through its curse, and be ready to awaken? The nearby Byzantine-dominated port town of Partenit may or may not be blissfully unaware of its neighbour.

The hills and interior of the Crimea are riddled with ancient cave tombs, many dating back to the ancient Scythians. The Tatars sealed many, claiming that they were demonic forces. Were the Skif, the Scythians, ruled over by a dynasty of vampires? Servants of the Kam? Or simply the victims of prejudice? There are a number of concentrations of these tombs, predating the Tatars, such as at Eski-Kermen, close to the Tatar capital of Bakhchisarai, a ruined fortified hilltop town built over large and unexplained underground chambers. The nearby mountain of Tepe-Kermen is riddled with more than 10,000 caves in neat, serried rows. Could the rumours of an entire necropolis hidden somewhere be true?

Then there are the kurgans or burial mounds of eastern Crimea, including some 200 simply around the town of Kerch, dominated by the 20m tall Royal Kurgan, probably the resting place of 4thC BC Leukon of Bosporus. The tomb has long been looted, but where does it connect to in the Otherworlds?

The Valley of the Ghosts in the southern Demerdzhi mountain (Blacksmith in Tatar) is encrusted with stone formations which some might discount as simple products of the wind and the rain., albeit which look like people at some times and angles, animals others Until, that is, the regular, thick fogs of spring and autumn, when have seem to move and change their shape, rock and mist together creating strange, terrible and prophetic shapes.

There’s much more. The human sacrifices of the ancient Taurid people. Chersonesus, the site of Prince Vladimir’s original conversion to Christianity. But that can wait.